Prince, a Labradoodle, and his human sister, Halle, have always been very close since day one. Prince even learned the trick to getting Halle back to sleep even in the middle of the night.

Zach and Sara Lebowhl live with their adorable Labradoodle, Prince, in New York City, and the three of them formed a little, happy family. In 2017, Sara conceived their first child, and the couple was over the moon about their growing brood.

Prince seemed to realize that they would soon have a tiny human joining their family, so he stuck by Sara’s side at all times. And when Sara gave birth to a beautiful baby girl, Halle, she made sure to introduce Prince to his baby sister properly. 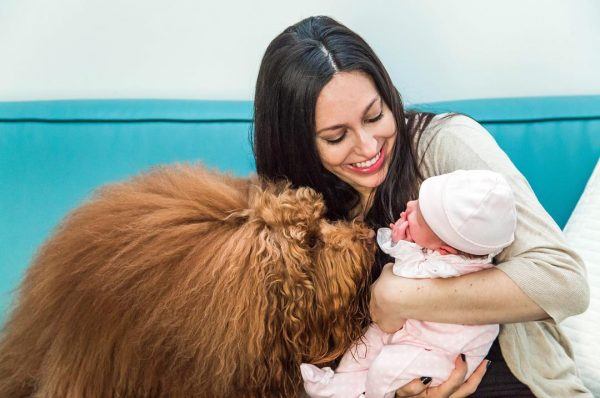 The couple was initially anxious about how Prince might react to having a tiny baby around. But they were relieved and happy to know that Prince is just as in love as they are with Halle. Prince knew he had to be very gentle around the baby, and was never far away from her. Sara even calls Prince a true nanny dog.

It’s been two years since Halle was born, and she and Prince have only become even closer. Prince always accompanied Sara and Zach in tucking Halle to sleep, and he also rose whenever Halle would get fussy in the middle of the night or early in the morning.

One day, Sara had the idea to check whether Prince would be able to calm down a fussy Halle alone, so she made sure to open their bedroom door as well as Halle’s door the entire night. Just as they expected, Halle woke up in the middle of the night. The toddler was crying and standing in her cot.

The worried Prince came rushing right away to Halle’s room, and the toddler calmed down somehow. And then Prince rolled on the carpet, and that gesture, quite mysteriously settled Halle. The toddler plopped down on her pillow, and off she drifted to dreamland.

Sara got it all recorded on cam, and she and Zach are still amazed to witness how quickly Prince was able to calm down Halle. It only showed how much Halle loves Prince that she feels secure having the dog around. Halle thinks of Prince as her source of security and comfort.

Halle and Prince share an extraordinary relationship. We bet it will get even deeper as they both grow together. Watch Prince’s unique ritual in calming down a fussy toddler in the video below.

Some time ago, I had a dog. It was a beautiful Dalmatian dog called Basil. We got him as a puppy. Unfortunately, when he was less than one year old, he started having epileptic fits. We took him to a doctor, and he prescribed him some medication that had to be given to him twice a day, but still, he had the fits from time to time. He grew to be a big a strong dog, so when he had a fit, the nearby furniture was flying everywhere. It was very distressing for us. Otherwise, he was a very loving but mischievous dog. Especially when our food was served on the table, he would jump and steal the meat. Very naughty. Obviously, we didn’t teach him good manners. He loved eating raw courgettes. So life with Basil was very happy but not very easy. When he was six years old, he had a fit but couldn’t come out from it. Our vet took him to his surgery but was not successful, and after a conference with us had to put him to sleep. We were devastated, especially my children. So now we just have a lot of happy memories and our photos. To honor Basil's legacy, I continue to write articles about fun-loving dogs that remind me of him. I hope you enjoy these stories as much as I do!

Our website is made possible by displaying online advertisements to our visitors. Please consider supporting us by disabling your ad blocker.